The role of women in Hollywood, entertainment and media has remained a constant growing struggle for women involved in the media, as women have consistently held traditional roles and perceptions that keeps the entertainment industry a mostly male-dominated society. As Haskell writes in her article, “Female Stars of the 1940s,” men may behave “refus[ing] to acknowledge his debt of birth to [his mother] and who simultaneously fears revealing his own feelings of love and dependency [for her]” (The Film Artist, 502). With that, misconceptions of women as they attempt to take a stand for their womanhood is swayed by the media and press; the reactions these women have to these misunderstandings and inequalities can distinguish whether they can be classified, as Haskell uses, “superfemales” or “superwomen.”

The sexualization of women is still widely apparent among our new media. As classic bombshell Marilyn Monroe experienced quite a number of abuses–both personally and professionally–in her life, she still never decided to back down. Rather, she fought against it with a “determination to not be weighed down by the darkness in her life,” but rather creating her own identity as a woman in Hollywood’s male-dominated society (“Marilyn Monroe: A bombshell, a feminist”).

Monroe, along with today’s Angelina Jolie–both with stunning beauty–exaggerate the female characteristics and exceed what society expects them to be. Angelina Jolie, with her family, is a famous actress who promotes the welfare of people in the world. She has adopted three children.

As superfemales, these are “women who are exceedingly ‘feminine’ and flirtacious, [yet] too ambitious and intelligent for the docile role society has decreed she play” (The Film Artist, 505). These women have gone further to express their femininity.

Ellen DeGeneres is a strong public figure who is both comedic yet extremely powerful at the same time. She has developed an iconic look and loved menswear long before it became “cool.” She has, as Haskell describes, a “high degree of intelligence or imagination, but instead of exploiting her feminity, adopts male characteristics in order to enjoy male prerogatives, or to survive” (The Film Artist, 505). As a superwoman, she has created a wave of change and effects in the talk-show medium, both entertaining audiences and bringing awareness to important humanitarian issues, all through adopting the identity of a man.

Likewise, Queen Elizabeth II of England–or the “Rainbow Queen”–maintains her stateliness and demeanor of an elegant woman while changing so many colors in her dressing style. As one of the most powerful women in the world and with a wardrobe like this, she has such great power.

On the other hand, some women maintain the idea of being both a superfemale and superwoman. Beyonce and Lady Gaga both may use their sexuality to gain the appeal of masses, but also say something at the same time.

As some women in the 1940s strove to equalize the role of man and woman, we can see some women today still striving to equalize those roles. Famous singer and performer Beyonce Knowles is known to be a strong advocate for girl power as she has performed a song for Oprah Winfrey where her and her female dancers are wearing costumes resemblant of business suits. Ultimately, this choice of suit implies the womens’ involvement in the male-dominated world, in the sense that they are imitating men and actively occupying those workplaces, just as well and equally as men. But, just as any “superfemale,” she is taking advantage of her sex and womanly-assets, but not sexually surrendering it in order “to gain power over men” (The Film Artist, 505). She addresses her femininity in the sexiness of her costume and movements, yet finds profound power in masculinity through her choice of costume and masculine dominance and control found in her words and aggressive mannerisms (“Beyonce and her Femininity”). 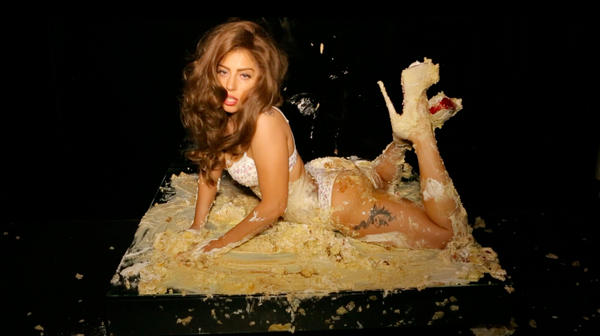 Social media has been an important medium for reinforcing what women feel, want, say, and think. Lady Gaga has been an avid user of twitter and commonly posts her thoughts and status updates to fans in order to be updated with her. For instance, she writes, “The real CAKE isn’t HAVING what you want, It’s DOING what you want.” This picture she posted grabs appeal, but she uses it alongside a personal thought.

Further, social media can also twist and put a negative light on celebrities. It was said that Beyonce’s publicist had asked the website BuzzFeed to take down “unflattering” photos of Beyonce from her Super Bowl performance. Though the Internet and the press may degrade women such as Beyonce for not looking as “beautiful” as a woman typically should, Beyonce turns to her publicist to respond to this issue and this may, in turn, further fuel her writing to create strong girl-power songs and anthems such as the one she performed for Oprah.

Lady Gaga has always received some ridicule, as her performance as “Jo Calderone” at the VMAs 2011 wasn’t generally favored. Ellen Killoran writes, “People originally embraced Gaga because in all her quirkiness was authentic … But stepping outside the more comfortable vixen role could hurt her” (“Lady Gaga VMA 2011: Jo Calderone ‘Degraded’ Awards Show”).

When speaking about her role as “Jo Calderone,” Lady Gaga says it was a moment for her to make a statement. By dressing up as a typical American man, “I wanted to see how I could take someone who is so approachable and so relatable and press a much more unrelatable issue that is so hidden or so chained up,” such as the issue as putting a woman in a male role. Further, “[I wanted to see] how I could put someone who is challenging all of those things in a very pop culture moment and force people to deal with it no matter how uncomfortable or exciting it may be” (“Lady Gaga Discusses Activism, Outing And Reading Her Male Alter Ego, Jo Calderone, As A Transgender Man”).

Both Beyonce Knowles and Lady Gaga have great talents and creativity, as their passions for their careers have led them to receive huge success and power, which may exceed what an ordinary “pretty and talented singer” can do. They become superwomen when they put male characteristics into their personalities to stimulate inspirations or convey their deep wills. Haskell writes of the “greatness of [classic] Hepburn’s superwoman, and Davis’ and Russell’s too–that she is able to achieve her ends in a man’s world, to insist on her intelligence, to insist on using it, and yet be able to ‘dwindle’ … ‘into marriage,'” without losing character, will power, or a strong sense of self and voice. That is exactly what these two women have done.

Whatever the case, the movement to make women more visibly equal in today’s society still builds upon ideas that were being tackled in 1940s America. Although we have obviously progressed as Haskell writes, “the superfemale become[s] the superwoman, by taking life into her own hands, her own way,” there are many examples of women in today’s society who take their lives into their own hands, choosing to do what she may. As the superfemale does not feel the need to completely rebel because “her circumstances are too pleasureable” and may enjoy attempting to “gain power over men,” the superwoman almost becomes a male and “adopts male characteristics in order to enjoy male prerogatives,” such as Lady Gaga’s outrageous turn towards becoming Jo Calderone (The Film Artist, 505).

As both “superfemales” and “superwomen” try to address the male-dominated, male-centric society and world we live in, the first may bring awareness, when the latter may be the one attacking it. Perceptions of women may still be oppressed today, but, we have gotten very creative with it–we’ve gotten so far, but still have a long way to go.