Because it is strange to come to the fact that I am 21.

I guess what makes it a little more weird for me is that, for twenty-one years of my life, I have feared and resisted alcohol of any kind. I’ve always been one of those health freaks who is always conscious of what she puts into her body, treating it as a “temple.” And, a big part of my turning twenty-one this past weekend was finally tasting–and weirdly enjoying–alcohol for the first time.

That Saturday night before it stroke midnight, I consciously prepared myself. I made sure I ate, behaving like a good girl to avoid any bad consequences to ensure my first experience was a good one.

The waitress at the Cheesecake Factory was sweet to me and my small group of my friends. Right when the clock stroke midnight, she came back to the table with a huge conniving sort-of smile on her face saying, “Happy birthday,” handing over a drink menu to me. I stared cluelessly at the menu, as it was the first time I had really eyed a menu searching for a good first drink.

She recommended me a Cosmopolitan (Skyy Citrus and Cointreau with a Splash of Cranberry Juice). And I anxiously awaited her return and replied to texts and calls while my friends smiled curiously at me as to how I would react with my first drink. I shook nervously, my hand twitching and heart racing; my breathing was impaired and I started to sweat. This monstrous idea of alcohol I had built up in my head for so many years had come racing right before my eyes as she placed the dainty little martini glass right in front of me, for my own consumption.

I was in disbelief.

It smelled and looked so strange. I saw particles floating around in the pinkish drink. And then in my first sip, I was thoroughly disgusted by the taste of mouthwash (of course, I had nothing to compare it to and didn’t know why people found enjoyment in it). After six or so sips, my friends downed the rest of the half-glass saying all they could taste was cranberry juice.

Arriving back to my apartment with my friends’ surprise, they had wanted me to take my first shot of Captain Morgan, thinking I’d be so down to drink. But, after 2 hours later, I was obviously not, and I still nervously held the glass in my hand, covered in constant spillage of failed attempts.  There’s even one hilarious video of me taking it and spitting it immediately out. That was it for me.

After some overwhelming feelings of stress, I started to cry because I felt lame and shameful at the same time because I couldn’t do it for my friends when they had to leave. I trusted them all, but that moment was interesting because I realized that as close as I could get to doing it, the idea of a shot still scared me. I wasn’t in it to drink just to drink–I wanted to taste. With the support of a friend who encouraged but understood me at the same time, she said, “This is your birthday. Do it for yourself, not for them.” 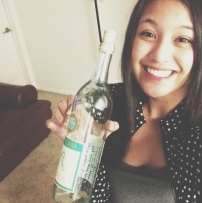 Then I knew in my heart that that was not what I wanted to do. I was later accompanied by just my three roommates and three very best friends that were my neighbors last year, and they positively encouraged and helped me finish a whole bottle of Barefoot Moscato wine by myself, slowly watching the process of my drunkenness. And then I felt like a champ (until I knocked over the last “shot” and yelled at my friend, “Get the wine out of your pants!”).

The feeling of being “drunk” was definitely not what I was expecting.

I had so long envisioned it to be a feeling of adrenaline in another state of mind, where you don’t really know what is going on around you. But, I still felt myself totally present and aware of everything happening around me. I just grew very comfortable within myself–as I would be with close friends–while having difficulties holding my weakened body up. It wasn’t all bad. I was smiling and giggling a lot, with my goofiness coming out ever so comfortably.

And so the day of my actual birthday happened. Running on sleep from 6am-12pm, I went to get “brunch” at a small eatery in Newport Beach called Eat Chow (which was  de-lish!). My friend treated me out and I had a peach-mango Mimosa, which was not too bad. Night and board meeting for Kababayan came, and then came my Yard House adventures.

My friend on board wanted me to drink beforehand, and I finally built up enough courage in myself to take my first “shot” of Ciroc. It was peachy. As someone who likes to fully “taste” what I put into my body–which is what makes my drinking things so difficult–I found myself to be a “classy” drinker.

I drank a whole half-yard of the Angry Orchard Crisp Apple Cider that night–5% alcohol and tasted just like apple cider. I was surprised I finished the whole thing feeling okay. But, inevitably I experienced my first “drunk moment” as I “lost” my iPod touch in which I started blaming everyone, only to then have it returned to me because I had left it in the bathroom.

And then came Monday where I had my free birthday pint at UCI’s Anthill Pub. I ordered the “Snakebite” (Black Butte Beer with Raspberry Cider). I liked the sweetness. Then friends made me try some of their beers–a Pale Ale, then a pint of the Black Butte Beer without the cider (strong “coffee-tasting” dark beer that was disgusting to taste). I ended up finishing two pints, leaving the pub expecting to feel more drunk (in which I was not entirely); though, as I started to leave, I could feel the “buzz” and was apparently very giggly and taking selfies with everyone–again. 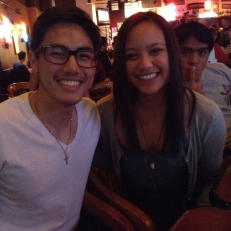 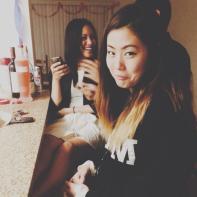 Then just a few hours later came my PACN board meeting at night, in which friends sweetly gave me a bottle of Kinky–which was so delicious and smelled like SoBe–but was 17% alcohol and scared to heck out of me because it was disguised so well. I sprawled my legs out comfortably on top of a friend, held my hand out and sipped on it with as much class I could have. (HA)

Three days surrounding my entire birthday weekend, I felt positive about social drinking– in moderation and drinking what you like, when you want to.

I felt so strange coming to terms with this positivity for the “happy buzz.” It was something so novel and new and foreign to my lifestyle. I knew that the moment I turned twenty-one would be crossing a threshold into the next stage of my life, letting myself grow comfortable with the idea of change and becoming an adult. It was the “first day of the rest of my life,” I’d say.

And before I knew it, Tuesday happened and the birthday shenanigans continued as I went to the pub with a good friend and my mentee as we shared some deep conversation (I only had a sip of the beer, mind you). That night, my old hall-mate who works at Blaze Pizza presented me–to my surprise–with a free whole pizza and s’mores pie cookie-dessert. My heart wanted to melt. A friend encouraged my “drinking-spree” with buying me a bottle of red wine in which I sipped throughout the night (a cabernet sauvignon, to be exact, which was the first wine I “tasted” accidentally in a wine-based sorbet ice cream six months ago).

And, just when I thought it was over, Wednesday happened and I was at PASS Talent Show reprising my guitar-role performing with friends in good company of a good crowd with good friends. And late-night dinner with PASS friends came, and so did my first Sake Bomb with three friends.

As I had so long feared alcohol just a few days before, the experience of it lingering in your body isn’t as scary as I had thought.

UPDATE 7/2014: To this day, I still have not experienced a bad moment; I know my limits, not letting myself drink too much to an excess; I let myself enjoy social buzzes to celebrate the newfound “twenty-one-ness” in me.

This “birthday week” continues to remind me of the good people I have around me; and, although it is strange and a little out of character for me to be spending my time doing this (closing off the quarter with my first ventures into drinking, playing music nonstop with friends, and sharing good conversation and company), isn’t that what being a young college student is about?

I am finally, legally, scarily yet comfortably an adult. And I’m starting to kind of feel like it.

Live with honesty. Live with purity. Live in good intention and always vow to do what feels most true to yourself.

UPDATE 7/2014: This day allowed me to realize that, although you may tell yourself that you “will drink when I turn 21” (or will be ready at some point), you can never entirely feel “ready” for something when the moment happens. As I was never ready for myself to take that first sip, I know I told myself I would. And, sometimes you’re never ready for these moments. You just have to go for them and see what happens.