Tash Sultana is an artist whose musical journey has completely transformed in the past few years. The Australian loop pedal maestro and talented multi-instrumentalist is a musician whose raw talent, passionate performance and grit sets her above all else — and when she’s selling out every single show she plays across America and Australia, I could not bare to miss the chance to see her in action.

Sultana brought her performance to the Fox Theater in Pomona on Monday night, playing to a sold-out crowd of crazed fans from all walks of life — music diehards, revered music critics, young, lost souls and millennials alike.

With her 2016 EP Notion, Sultana’s dynamic guitar and vocal skills shine in singles such as the breakout looping masterpiece “Jungle” — a song in which she layers four-chords with heavy basses, bluesy guitar licks, a rhythm pad percussion section and hypnotic pedal moves. The ever-melodic “Notions” takes listeners into outer space as her guitar both floats and comforts us as she lets pure feeling move through her music with echoey vocals and guitar licks.

The energy in her live show is incredibly electric — you feel the energy and the passion as her music seeps into your soul, taking you into another place of euphoria that you can’t help but let out a chilling woo. At one point, a girl busted through the doors to the stage in a moment of euphoria to get closer to Sultana, while a guy shouted out his love for Sultana when she hit “Notions.”

Sultana’s music has the ability to move mountains — and when her songs push the 10 minute mark, she seems to stop time as every minute is so full of feeling and presence (something she mentioned is a big part of her journey of playing honestly and authentically). From her transformative and melodic songs and vocals, aggressive and percussive finger-style guitar playing, pan flute jams, banjo riffs, intoxicating rhythm pad beats, she is a musical force to be reckoned with — and I don’t say that lightly.

Watch a clip of her live performance at Fox Theater Pomona below: 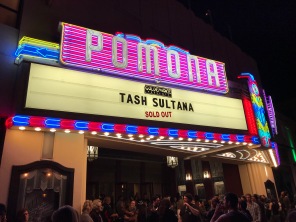 Sultana is currently playing the Coachella in Indio, CA throughout April 2018, and playing a slate of sold-out shows throughout America and Australia. Keep up with Sultana at tashsultana.com.

One response to “From Busking to the Big Stage, Tash Sultana Blew Away Hearts and Minds, Live at Fox Theater Pomona”