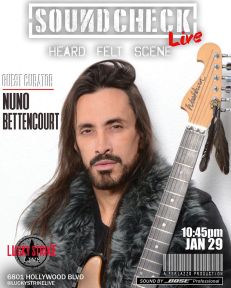 Amongst the sudden tragedy of Kobe and Gianna Bryant’s helicopter crash on Sunday, all of Los Angeles is mourning — and it’s nice to see folk in Hollywood and beyond paying tribute to such a leader, warrior, athlete, father and stand-up man.

And, of course to spontaneous little fangirl me, I decided, “Why not try to make it out?” after an LA Kings hockey game with some friends at the Staples Center.

Nuno was set to hit the stage at 10:45pm, and, with some hustle and bustle, I told my friends, “If you’re down for a random rock show in Hollywood, you’re free to come.” I continued, “I have no idea what to expect, but it’s just gonna be a bunch of legendary guitar players and whatnot.”

Nice to say, I dragged my friends for one very Los Angeles night, and was treated to some of the most insane and talented musical legends. (Oh Nuno, ever since NAMM, I feel I will fan girl over you like crazy, ha!).

Among Nuno bringing on some widespread talent, guests, a vocalist named Gabrielle, and then Gavin, they threw the place off the roof.

Here’s an exclusive clip I managed to scour from my ever-poorly-functioning phone.

With love and honesty,

Keep in touch with more live updates on my Instagram at instagram.com/rachelcansea.