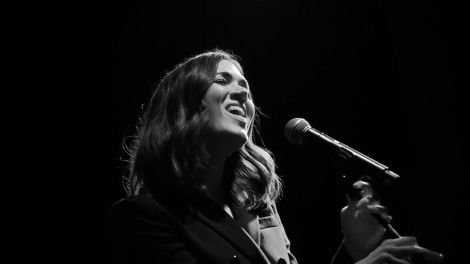 Mandy Moore performs her new record ‘Silver Landings,’ due March 6, with an intimate four-night residency with friends at the Bootleg Theater.

Y’all. My tween self is dying.

It’s been more than ten years since Mandy Moore has performed any of her own songs on stage for an audience and wow, I have to say, she has come a long way.

Throughout the past year, Mandy has teased studio pics and song clips of her recording her new album in the studio to social media, much to the excitement of fans who have been yearning for new music.

For special Los Angeles residents, Mandy surprised fans with a four-night residency starting January 18 and going through February 8, 2020, to have a “casual night of music” and “just have fun” celebrating the Los Angeles music community and her new record Silver Landings, due March 6, right here in Los Angeles at the Bootleg Theater. 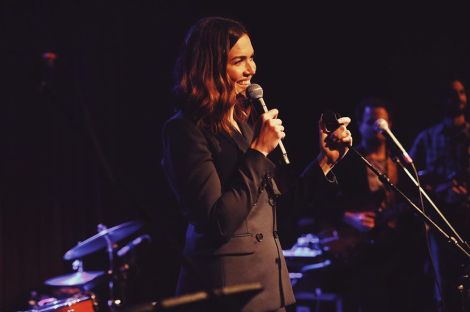 I remember sitting at home as a 15 or so year-old teenager browsing through videos on YouTube and uncovering a hidden clip of Mandy Moore performing a stripped-down version of her hit 1999 breakout single “Candy” and thinking, “Oh my God. I would have died to be in that room.” Of course, that video occurred quite a few years prior (and my underaged self couldn’t get herself into venues or out of the suburbs), and, in the late-to-mid 2000s, Mandy was pretty low-key.

Mandy’s breakout film success from 2002’s A Walk To Remember won all our hearts (and provided me my first vision of an individual I could relate to, see myself in, and who’s impact I felt I could strive to follow in Jamie Sullivan). She then followed with a few mid-2000s rom-coms (Saved!, Chasing Liberty, Because I Said So) until she realized how much she missed music and how her early bubblegum-pop music didn’t suit her anymore. She took it upon herself to release her first collection of adult contemporary songs in 2007’s pop-folk album Wild Hope, and then 2009’s Amanda Leigh, her last album to date.

Since that moment, a marriage and a whole decade later, Mandy’s been immortalized in history as Disney princess Rapunzel in Tangled; snagged a leading role and Golden Globe nomination as Rebecca Pearson in This Is Us; and even was granted her own Hollywood Walk of Fame star in March 2019.

This year, Mandy is set to release her new record Silver Landings via Verve Records — her first record in 10 years — on March 6, with a North American tour to follow starting March 20.

I, as well as some other eager fans, started lining up at the doors by 6pm (maybe a tad too early, if I have to say), as tickets were only available at the door, day-of.

By 9:30pm in that packed room of eager fans, Mandy warmly entered the stage, introducing the night and how her past 20 or so years in this industry have taught her a lot. She mentioned how much she misses and loves music and that she just wants to keep the night casual and cool, bringing on a couple of her special friends and co-songwriters (Grammy winners, I might add) to celebrate how cool the LA music community is.

(These are the things I love about LA, I have to say.) 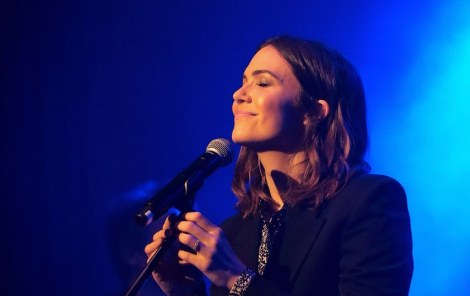 A musician who’s voice Mandy loves, singer-songwriter Bedouine started off the night, casually plucking her guitar and joking, “This will be my fastest song, but probably the slowest song you will hear tonight.”

Mandy then kicked things off with “When I Wasn’t Watching” and, one of my personal favorites, the reminiscent of Fleetwood Mac single “I’d Rather Lose.”

Fans would request songs like “Candy” or “In My Pocket,” where Mandy would laugh and say, “Oh the deep cuts are always good ones.”

Still, Mandy was proud to have her band by her side, with producer Mike Viola and husband Taylor Dawes Goldsmith in the band. She had guests Dan Wilson come up, to which they sang his rock ‘n’ roll Semisonic hit “Closing Time” and got the entire room joyfully shouting back every lyric.

“How do I follow that up?” Mandy asked, pleasantly surprised at how much the room was loving him.

Grammy-winning songwriter Natalie Hemby (in town from Nashville for Grammy Weekend), also took to the stage and sang her hit song from A Star Is Born, “Always Remember Us This Way,” joking, “I’m not Lady Gaga, but I hope you enjoy.” (Safe to say, she pleasantly impressed us all with her genuine talent.)

Natalie also joined Mandy to harmonize for the title track of her album “Silver Landings” — a beautiful song about chasing dreams, missing connections, reaching high for “golden ribbons up in the air” when all she’s looking for is “silver landings.”

After a slew of new songs, including the heartfelt and surprisingly powerfully poignant “If That’s What It Takes,” a song about trust, marriage and love, and “Fifteen,” a song in adoration of her early rise to success and 15-year-old self, she closed the night off with a throwback to 2009’s “I Could Break Your Heart Any Day Of The Week” and, of course, “Candy.”

If you can see from my video above, the energy was electric.

Mandy’s new songs are incredibly deep, thoughtful and insightful, as hearing her songs for the first time live was a lot to unpack — both lyrically and musically. At 35-years-old and 20 years of growth in this industry under her belt, her sense of humility, passion, self-reflective songs and genuine joy for music was felt.

She’s not in it to win the next Grammy. She’s not trying to beat out her comrades. Rather, it seems Mandy is at a wonderful, comfortable place in her life. She’s not quite reaching for anything anymore, and feels just alright with the silver landings.

You can still catch Mandy Moore’s Silver Landings: A Weekly Residency with Mandy Moore and Friends at the Bootleg Theater in Los Angeles these next two Saturdays — Feb. 1 and Feb. 8. Tickets are $20 and available at the door only on a first-come, first-serve basis.

So, who wants to join me next week?

What a special night with @mandymooremm and friends celebrating her return back to music with a whole new record, 10 years later, with a lifetime of stories and reflections on her youth, her 15 y/o self, to love, loss, finding herself and marriage… I almost felt like Mandy was speaking my own story! These are the kind of nights I love about LA and the music community here. I think we all need good role models, and when we’re young, we can develop such a strong relation to someone we feel we can see so much of ourselves in. I am SUCH a fan of Mandy (and it makes me laugh sometimes), but I think that can be a powerful thing. Having someone to look up to when you’re a kid can do wonders for the world — for making more interested, curious and self-aware kids who just want to bring their best selves in this world. And in the words of Mandy, while everyone’s chasing golden ribbons, I just want the #silverlandings… ✨ So who’s up for round 2 of her 4-night residency here in LA?! 🙋‍♀️ • 📸 @alexxxbud ty for always letting me shamelessly fangirl. #mandymoore #silverlandings #bootlegtheater #residency #losangeles #livemusic #music #concert #aboutlastnight #newrecord #newmusic #2020tour #grammyweekend #missingyoulikecandy

2 responses to “Mandy Moore is Back with ‘Silver Landings’: An Intimate Four-Night Residency at Bootleg Theater”