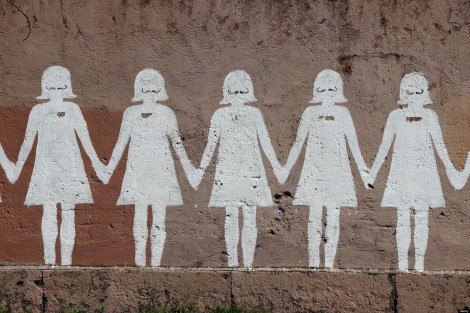 These are all terms oftentimes associated with the adult-film industry. Though, as easy as it is to take things at face value, one of the greatest challenges is in finding anything positive about an industry that has been hush-hush for so many years.

Growing up in this post-feminist kind of society where people are challenging each other with what is considered feminist and what is not, further blurring the lines between its actual definition and what is just “rebellious behavior,” it is interesting to see how we live in a high-time where women all over the world are just fighting for their voices to be heard and respected.

Feminism, to me, is about advocating and supporting the equality and rights for all women—including being each other’s support systems and lifting each other up, not down. I believe acknowledging what women have done throughout history, from fighting for their right to vote to working in the same place as men, can make one feel grateful for where women stand today.

I first started to get interested in feminist issues as I became sensitive to others’ behavior towards myself as a woman. Experiencing numerous events of men trying to make advances or take advantage of my womanly assets, I grew uncomfortable with my own body. Growing up Catholic in a small-town also led me to become very sheltered in that female sexuality was hardly talked about, let alone accepted. But, as I grew older and began to create my own definition of self-respect, I found it in my heart to know myself before I could expect anyone else to know me better.

Seeking to debunk the stereotypical myths of the adult-film industry and, more specifically, the women who work in it, I took up an interest in that world and its people.

While sexual intimacy is one of the most natural and beautiful acts to express love to a partner, the porn industry seems to make this entirely private act into something doggedly intrusive and mortifying. But, after reading and watching interviews from stars who share their thoughts on the industry—from how they got involved in their line of work to expressing the politics behind it—I’ve found that there are respectable women in the industry. Veteran performers Samantha Ryan, Stoya, and ex-performer Sasha Grey have actively participated in interviews and other social media to convey their thoughts on women and workers’ rights in the industry.

Noting that she had worked as an engineer, Ryan expresses, “I had bosses that were complete idiots and never knew the value of my work because they didn’t understand the work that I was doing.” She adds, “I just went through all these things in my life and—they weren’t failures—it was just things happened in these careers that I tried that made me realize that either I didn’t want that or it wasn’t gonna be for me or it made me realize more of what I wanted.”

Being active in the industry for nine consecutive years, starring in more than 400 movies and having won numerous AVN (Adult Video Network) Awards over the years, Ryan has become a notable and well-respected performer.

But, in her interview with Meadows, she states that “[this] is still an industry that you have to navigate. It’s tough and you will deal with not so great people and, you do run into the girls that are doing the drugs because they don’t know how to handle it.” She adds with conviction, “That shouldn’t be how it is.”

“The agents see them as fresh meat! They know the industry. They know that the majority of girls are in-and-out in a year. So, what’s gonna be most beneficial to my pocketbook?” Ryan expresses. “Getting that girl to do everything that I can in that year.”

Although there are many thoughts about the industry and the way in which they treat its performers, adult performer and model Stoya, who entered the industry at the age of twenty-one, is an active social blogger and online-user who has been very vocal in sharing her thoughts to defend the views and ethics of women in the industry.

“Nothing about the pornographic material I perform in does anything to intentionally further feminism,” she writes in her VICE column entitled “Feminism and Me.” “It is bluntly superficial entertainment that caters to one of the most basic human desires.” She continues, “I see it as neither inherently empowering nor disempowering. Showing up on set and doing my job is not an act of feminism.”

“I always go back to this idea that women aren’t allowed to be proud of their sexuality or their sexual fantasies.”

As an act of feminism, women should feel empowered to speak about their bodies and openly embrace their feelings of pleasure or displeasure.

Grey continues, “It’s a great thing to allow women to feel liberated with their fantasies and not feel inhibited by them.”

And that should be the focus people take on pornographic work.

Women, both in porn and in the workforce, are often seen as less in character and less in number in many male-dominated industries. As society has hyper-sexualized the identity of women, enforcing the use of women as objects of visual pleasure, it has also concealed the presence and credibility of many women in these industries. So, it is no wonder that in the Academy Awards—a major outlet for distinguishing the “best” in media—77 percent of voters and 99 percent of “Best Director” winners are both male (“The Diversity Gap At The Academy Awards Is As Hugely Discouraging As You’d Expect”). The visibility and demand for female voice and representation is gravely low.

But, as pornography and sex-centric works are never going to go away, so are the women who perform in them.

As women have continually been told that sexuality is bad, I feel it is our job—in the effort to promote equality—to change our attitude towards how we view women who work and perform in these industries that tend to promote women as sex objects. If women cannot even embrace and take ownership over their sexuality, what makes us think men can?

The mere act of performing any sort of creative work does not send any sort of message. The message stems from what people do with that work and what feelings are produced to inspire and motivate others from that work.

As the use of love, sex, romance and violence have all been tactics of the media to grab people’s attention, I feel we ought to use that power to harness positive change.

In creating change, the first step is in getting one’s attention–the next step is in holding it. When we can hold one’s attention and create a louder demand for change–whether it be in holding our arms, voicing our thoughts and standing up together–only then can we take action to make change happen.

As Stoya writes, “The messages I get every week saying that seeing my body or vagina portrayed as some kind of sex symbol made someone feel more comfortable about their own body,” she expresses, that is what keeps her doing her job.

Whether someone was drawn to her looks, her uncanny smile, her way with words, her sense of dark humor, or what have you–she stole our attention.

@stoya It's a strong reminder that they're people, not mere sexual objects.

I am a Music lover, Guitar player, Journalist, Dreamer, Lover of the outdoors and Old soul in a young body. Your average 20-something broke girl.