“I tried out for ‘American Idol’ and didn’t get it,” Marlana Sheetz laughed. “But being in this cool band and being here is so much cooler.”

She put her drink aside as the sold-out crowd roared.

Opening up to a rhythmic drum-filled sequence led by drummer Curtis Marrero, band members Andrew Heringer and Graham Fink wielded their guitars as their guitars soared over the cinematic soundscape. A ghostly Robbie Arnett emerged from the shadows adding his bass. More and more musical tension built up as the beat grew faster and faster. Screeching guitars roared into the night and built up to Fink’s light electric-guitar plucking. Then, Sheetz came out through the fog to transition into the smooth dance-hall tune “White Lies” off the band’s second album “Control,” released just one month ago.

It has been two-and-a-half years since Milo Greene made their last appearance at the El Rey Theatre. Dubbed their “hometown show” for this Los Angeles-based band of UC Irvine alumni, their songs, full of whispering melodies, gorgeous harmonics and roaring acoustics, created an atmosphere of smooth vibes and energetic performances for all family, friends and familiar fans in attendance last Thursday night.

“It’s so cool seeing familiar faces in the audience tonight,” Sheetz continued with a notion of gratitude.

But, no one was having more fun than the band itself.

With two records under their belt, Milo Greene has proven they are worthy of headlining their own national tour. Titled the “Lonely Eyes Tour,” Milo has merged songs from their first record throughout their one-and-a-half-hour set seamlessly, showing us just how creative and fun their performances can get.

Mentioning that they had wanted to create music in their first album that they could potentially see in movies and television, their second album “Control” has taken a shift towards a more percussion-based collection of songs.

With more up-tempo tracks that are more rhythmic and dance-inducing, their songs make you want to get up into a groove-worthy craze—and the band was not shy in hiding those urges.

The band powered through their new record with songs like “Save Yourself” and “Not Enough,” featuring cool retro bass-lines with Arnett’s breathy vocals and feet-flying dance frenzies. Notorious for playing multiple instruments, they went on with ”On The Fence” and “Heartless,” in which Arnett and Sheetz shared lead vocals as Heringer and Fink chimed throughout.

The powerful “When It’s Done” was led by guitar-savvy grunge Fink, whose voice persisted throughout in a tight, uncontrollable fashion. Heringer crooned into the night with an unmistakable nostalgia with his sweet, husky-filled cover of Phil Collins’s “Take Me Home.”

The band’s best moments were when they let loose and let their personalities shine, however.

As the multi-instrumentalists they are, Fink equipped his electric-guitar and drumsticks simultaneously to add extra drumbeats, rocking back-and-forth between songs; Sheetz, accompanied by her keyboard and beat-machine, occasionally brought back her guitar and bass only then to let loose and dance the night away in “Lonely Eyes;” Arnett smoothly slid all over the stage; Heringer earnestly persisted; and Marrero kept the beat going.

The band played back old favorites such as “Cutty Love,” “Don’t You Give Up On Me” and the infamous “1957,” which truly took the crowd away. “Wooden Antlers,” with its heavily percussion-driven, tambourine jungle rhythms played to consistent “whoa’s” by the band put them in a euphoric spell, and ”Perfectly Aligned” (my personal revelatory moment) beautifully highlighted Sheetz’ breathtaking vocals (and completely moved me that night). 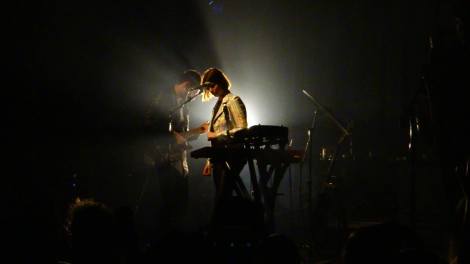 As rising pop artist Zella Day opened the night fresh off the release of her debut self-titled EP, her smooth pop and electronic beats allowed the crowd to continually chant all the way until Milo Greene graced their beloved stage.

What first began as a collection of friends has now turned into a promising musical partnership for this group of four distinct songwriters and musicians whose collaboration is at the heart of their songwriting. With such drastic and differing personalities, their debut self-titled 2012 album has provided them with a devoted fan-base drawn to their heavily acoustic, woodsy indie-folk sound; but, with the release of their 2015 sophomore album, the band is telling us that they are here to stay. And, as nearly every song was mouthed by the entire audience that night (or just myself), the energy in the room was truly close to magical.

With high energy, high adrenaline and lots of love, Milo Greene delivered. And that’s when you know you’ve found a good artist—when they leave such a lasting impression on you that you can’t get their music out of your head.

Tyler Blackburn and I. Because meeting new friends is always cool. ❤

Milo Greene: The defining artist of my college years. From being the first artist interview I have ever done, to being one of the few contemporary artists to move me. Thank you for the memories. And thank you for always making it a good time. ❤

This article was featured in The New University.