There are only a few shows I go to where the feeling in the room is truly indescribable.

Oh Wonder‘s synthpop melodies and honest songwriting has made fans all around the world fall in love — to the point where they are selling out shows in London, Paris, New York and LA. And for London-based indie-pop duo Josephine Vander Gucht and Anthony West, the honor is all theirs.

The charming duo came with all smiles this Monday and Tuesday to play two sold-out nights at the Ace Of Spades in Sacramento — and if the visibly winding line around the block full of teen girls and older millennials wasn’t enough to gauge the amount of love fans have for this duo, their live show was enough to show it.

Oh Wonder is a fairly new band whose unorthodox approach to releasing their debut album had solidified their viral fanbase (they secured a spot at this past weekend’s Coachella Festival). Back at the beginning of September 2014, the duo wrote, recorded and released one song every month for a year — all self-recorded and produced at their home studio in London — culminating in their show-stopping self-titled debut album that September 2015.

Since then, the duo’s illustrious touring career and sudden success has put themselves in wonder.

“We are so thrilled to be here this evening with you guys,” Vander Gucht said into the audience with a wide smile and open arms Monday night. “We’ve been walking around Sacramento all day. My favorite thing about Sacramento is you have palm trees — but it’s raining!”

The band opened with “Livewire,” a sweet melodic track and fan favorite that the crowd cheered, wooed and sang back to. With a large LED light spelling out “OW” behind the two who stood upfront with pianos, beat pads and West’s occasional guitar, their setup was clean, minimal and didn’t take away from their performance (and made for a sweet photo opp).

As the duo went into their next song “Without You,” it was met with a flurry of handclaps and dance grooves. The infectious piano riff and catchy drumbeat as the duo sang, “Cause I’m kicking up stones without you / Can’t pick up the phone without you / I’m a little bit lost without you / Without you” was too hard not to love.

Their simple beats and grooves may sound similar to each other, but each track was melodically different and had a charm of its own to be able to differentiate one song from the next.

A conversation with another fan made me realize that though their songs may be simple, their heartfelt lyrics and feel-good sentiments are what truly drive their magnetic success. 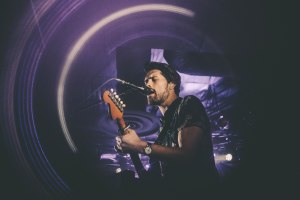 Some songs, such as “Lifetimes” and “Dazzle,” feature more hip-hop, R&B-driven grooves as West goes into an almost-rap followed by contagious downtempo drumbeats that made everyone’s hands go up into the air. “Lose It” is a feel-good ode to love and dance as they sing, “Move your feet and feel it / In the space between / You gotta give yourself a moment / Let your body be,” encouraging the crowd to let themselves go and “lose it” to a sweet, somewhat jazzy piano number.

“All We Do,” the song that first introduced me to the band, may be one of their quieter songs, but it was clearly a fan favorite.

Vander Gucht’s soft, sweet vocals against West’s warm tone grabbed hold of the crowd as they spoke out, “All we do is hideaway / All we do is chase the day.” The soft pluck of the piano that builds up into an echoey backbeat stole the crowd as they continued, “I’ve been upside down / I don’t wanna be the right way round / Can’t find paradise on the ground.”

The duo continued with “Landslide,” a sweet song about being there for each other and “Body Gold,” an empowering tune about love and salvation (“Before you came ’round I was heading for a small disaster / Before you came ’round I was ready to blow me down”). The Sacramento crowd was also “the first city in the world to hear their new song,” “High On Feelings,” presumably the next song off their newly-announced follow-up album Ultralife.

With catchy songs that make you want to dance, groove and let yourself go to something that hits a little too close to home, things are only looking up for Oh Wonder. Their incredible musicianship — both onstage and in the studio — is evident. They took the stage hitting those piano riffs, beat pads and colorful melodies with all their heart and soul. No gimmicks were needed — they had fun, we had fun, and it showed.

There are only a few shows I go to where the energy in the room is just INDESCRIBABLE. @ohwondermusic just put on one of the most energetic, heartfelt, feel-good sets I have ever experienced. Two completely humble individuals from London and I'm so happy to witness them at their start (and make a couple new friends along the way)! P.S. can someone sneak me into night two tomorrow? 🙏 #ohwonder #ohwondermusic #withoutyou #aceofspades #sacramento #midtown #concert #music #livemusic #upcomingartist #fromcoachellatosacramento #soldoutshow #pop #rock #softrock #popduo #ustour #onamonday