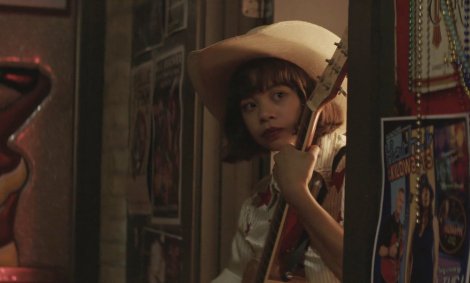 Yellow Rose provides an intimate coming-of-age portrait of finding your identity through music and the immigrant experience.

In the lone star state of Texas, a young Filipina teenager wields her guitar. Adorned with a cowboy hat, blue jeans and cowboy boots to fit, she emerges from behind the red curtains. And in that moment, all reality seems to be lost. The fear that she might have to face deportation, just like her mother, is forgotten.

As the crowd roars in appraisal, we are reminded that this is her home.

Yellow Rose, a film written and directed by Filipina-American director Diane Paragas, had the honor of being the opening night selection at the 35th Los Angeles Pacific Film Festival (LAAPFF), held from May 2-10. It was also the first Filipina-directed movie to kick off the festival.

With a star-studded cast full of Filipina talent, from title character Rose, played by two-time Tony Award-nominated Broadway actress Eva Noblezada (“Miss Saigon”) in her feature film debut, esteemed actress, singer and Broadway star Lea Salonga (“Mulan”) — whose performance marks the end of her 24-year-long retirement from the big screen — and Princess Punzalan (“The Story Of Us”), the opening night felt like a true celebration.

“It was like Filipino Hollywood,” director Paragas recalled to ABS-CBN. “Filipino royalty came out to support it and there was so much love in the room.” The premiere celebrated a sold-out thousand-seat audience.

Yellow Rose tells the story of 17-year-old Filipina Rose (played by Eva Noblezada) who dreams of becoming a country music star. Told throughout the smoky and dreamy landscape of a sleepy small town in Texas, we see the relationship Rose shares with her mother Priscilla (played by Princess Punzalan). Her mother works as a cleaning lady for the motel they reside in, and when her mother is suddenly detained by immigration officials in an extremely dramatic and raw moment, Rose’s world is turned upside down.

To think that one day you’re living your life and going about your daily routine, only to have it suddenly disappear right in front of you, is shocking. And when Rose cries, squeals and yells after her mother in pure desperation, you can’t help but feel for her.

Throughout the film, Rose struggles to find a place to stay. Having lost contact with her mother, not knowing where she’s gone or where they took her, she finds a note from her mother telling her to go to her Tita Gail (played by Lea Salonga). She finds she is unwanted there and takes refuge in the attic of the grungy music bar while avoiding immigration officials just to stay in the only country she’s ever known as home.

To think this is Eva’s onscreen debut is surprising, as she plays Rose with an incredible sense of rawness and emotion. She plays the perfectly distraught teenager who constantly feels out of place, is drawn to her guitar and writes songs for nobody but herself (“I feel out of place / Song out of tune” are lyrics that heavily resonated with me).

Her character’s frustrations are incredibly felt; her naivety and youthful energy as she strove for her own independence (as when she snuck into a grungy dive bar to see her favorite country music star Dale Watson perform) are endearing; and her struggles to learn to stand on her own two feet as a young girl who suddenly lost her mother are heartbreaking.

All the while, Rose struggles to figure out who she is: an out of place sun-kissed brown teenager in white Texas who loves country music but has to fight for her reason to stay. Her experience is unique, yet gives character to her song and story — something recognized among those she comes across the way. Her potential is even recognized in country music star Dale Watson, who — in a moment that specifically hit close to home for me — tells her that the music she writes for herself is useless if nobody hears it.

The music in the film is incredibly beautiful, paying homage to true country music with its love of acoustic storytelling. The backdrop of American country music and country star Dale Watson himself gave an air of authenticity to this film. And, both Noblezada and Salonga had moments to show off their stunning voices.

The way Paragas intertwined the beloved Philippine ballad “Dahil Sa Iyo,” a song that has transcended time and become integral to the Filipino culture, was absolutely beautiful. Translating to, “Because Of You,” the song served as a beautiful timeline to weave throughout the beauty of Rose’s changing transitions in life and coming to terms with her situation. As it begins with Rose’s mother singing it to her to sleep as a lullaby, to another moment where Rose saw her Tita Gail singing it to her daughter in the home she didn’t belong, to Rose then singing it herself back to her mother over a FaceTime call to the Philippines, the beauty of the song signifying roots and home was absolutely beautiful. In moments of chaos and tumultuousness, the song brought home back together.

What stood out the most to me was how incredibly authentic and real this film felt to the Filipino experience. As most immigration stories seem to document Mexicans, the Philippine experience seems to go unheard. As a young creative and “lost soul” myself, I found myself relating to Rose, whose love of music and storytelling was pure as could be, and her talent immeasurable. Original songs, written by Noblezada, Paragas and Watson themselves, weaved the story together in a beautiful way.

Yellow Rose is an incredibly real Filipino-American story that doesn’t slap you in the face with cliche Filipino sayings or moments. Rather, it’s a sweet, dramatic and incredibly emotional story that pulls on your heartstrings and provides younger generations of kids with an understanding of the struggles our immigrant parents had to endure in America. Priscilla, who seemed to focus on nothing but her work and providing a home and opportunities for her daughter Rose, was someone I saw my own mother in — a quiet and independent figure who lives her life putting her family first.

When Rose took to the stage in that last scene, supported by her friends, Tita Gail on a tablet streaming her performance to her mother and family in the Philippines, and budding young lover Elliot Blatnik (played endearingly by Liam Booth), you couldn’t help but cheer for her. No matter the struggles in the world — the fact that Rose has to deal that she is illegal, that she doesn’t belong here — we find that this is her home. This is her moment. This is what she’s meant to do. And this is where she belongs.

Yellow Rose is a film that took Paragas 15 years to make and deals with real world issues in an incredibly relatable, entertaining and universal way. It’s a proud moment to celebrate women, women filmmakers, and more specifically, being Filipino-American today. I hope this film is one that you have the chance to see yourself, too.

Since its premiere, the film has reaped awards from three major film festivals across the nation: the Grand Jury Prize award at the film’s world premiere at LAAPFF on May 10; at the Bentonville Film Festival on May 11; and at San Francisco’s CAAMFest 37 on May 12.

For updates on the film and your chance to see it, go to yellowrosefilm.com.

I am a Music lover, Guitar player, Journalist, Dreamer, Lover of the outdoors and Old soul in a young body. Your average 20-something broke girl.