“Why the hell am I crying right now?” I tell myself. 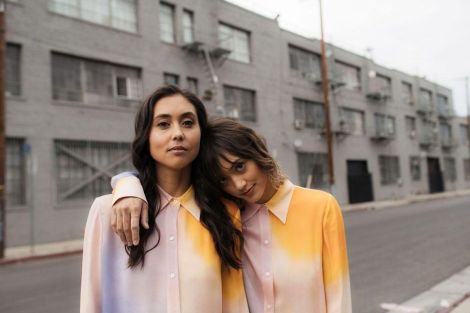 In the new video for Meg & Dia’s “American Spirit,” which premiered on Forbes today, the sisters are visibly crying to each other, muttering words such as, “I should have been happy for you,” and, “You’re not alone.” They’re about to face their close call to death by a camera-robot-director in the year of 2036.

The video, which comes fresh off the release of the sisters’ surprise album happysad, released this past Friday, July 26th via Pure Noise Records, is a welcome addition to the sisters’ relentless pursuit of their passion.

For the past eight years, sisters Meg and Dia Frampton had parted ways and set forth their own paths. Dia’s time on The Voice unexpectedly caused band tension as she became runner-up on the reality show’s inaugural season in early 2011 and recorded a solo album, as per contract by Universal. Dia tried to hold the band together as much as she could until their differences set them apart.

In this video, Meg tears up behind Dia and mutters, “I just felt left behind.”

But, from those differences and years apart diving into solo projects and soul searching, Meg and Dia both seem to have come into their own, and happysad showcases their rebirth as a band and as sisters, eight years later, older, wiser and a hell of a lot more sure of themselves.

“Happysad, to me, means enjoying the whole spectrum of human emotions without getting lost too far in either the pressure of needing to feel totally happy all the time or losing yourself in darkness as a subtle form of self-inflicted unworthiness,” Meg explains.

“We got to explore our fun, quirky sides with this video, and dive deeper into our relationship as sisters,” Dia says of the video. “It shows us coming together at the end, which is exactly how I feel in real life. I always feel stronger and more clear-headed with my sister around — like I can take on anything, whether it’s my own inner critic, a breakup, or yes, a giant, crazy, killer robot.”

As one of my favorite songs on the album, “American Spirit” is a song — to me — about searching and seeking faith and reason in the American way of life. With lyrics, “They say it’s all in meditation / But  when I sit still, I’m afraid what I’ll find,” the song is about finding help in spirituality, only to find that it all starts within yourself.

“If I let go of holding tightly
Will I see Jesus in a stranger tonight?
The devil hides in Coca-Cola
But if I’m high, will I be more qualified?
‘Cause in my Elvis Presley record I found the light
And my books say I’m a badass for just $12.99″

As if these lyrics were not telling of their own, in podcast Ride or Cry with Emo Nite founders Morgan and Babz, Meg opens up about her experience with ayahuasca and embarking on a silent retreat, which inspired this first song written for the album. (And if I must add, I myself had wanted to embark on a silent retreat, given my wandering soul self. Sage Meg has given me all the information I need to know.)

This 10-track album laced in emotions has the sisters open up about their strained relationship as sisters and best friends torn apart. But, as honest as the writing is, the album is musically upbeat — something I feel captures the sisters’ palpable excitement of the “magic” that happens when two sisters reunite, both professionally and personally. And you can feel that.

The music video, directed by Saman Kesh (Ed Sheeran, Calvin Harris) and Justin Hopkins, who Dia had reached out to personally as a fan, also stars Osric Chau and Khalif Boyd as Bob and Tom. It’s a terrifying tech video that has the girls facing their biggest fears and struggles, but coming back stronger, better than ever.

My initial thoughts: “Why the hell am I crying right now?” “That was so damn intense.” “Did that thing just whack Meg?!” And to Dia, “Yes, beat the hell out of those robots tearing you two apart!!”

Meg & Dia will be on the road for their first tour back together this September, following this summer’s Warped Tour and Disrupt Festival dates. Tickets are on sale now.

Guess who’s baaaack?!! Not us. Ew, that’s my brother. But that was a fun little reunion: Meg & Dia, boardies, conversations, tasty tiki cocktails and all. Nice to get my emo on, one last time. But I’m really just ready for the #happysad tour now. Will I see any of you there? P.S. Who else is getting a little overwhelmed by the MaD overload? A surprise album drop? Podcasts? Interviews? Ayahuasca trips? A new music video?!! I love it but cannot contain this excitement. My inner 13 y/o self might just cry. #madforever #meganddia #warpedtour #rockstardisrupt #happysadtour #reunited