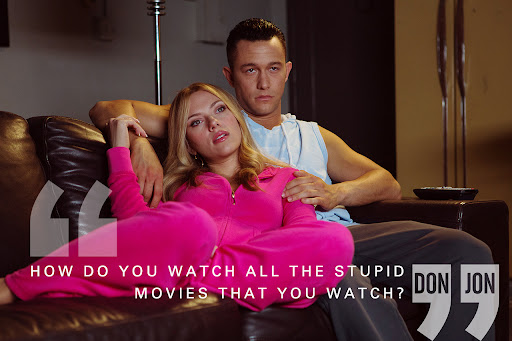 Immediately after watching Don Jon at its midnight premiere, I said to myself, “What the heck did I just watch.”

It is at this moment that JGL successfully illustrates the unrealistic idealized visions of love and sex that both genders hastily eat up.

In an interview with USA Today, JGL mentions, “Scarlett does get reduced to that oftentimes in our culture. As I’ve gotten to know her, she’s a super-smart person, a really talented artist, and yet a lot of what gets talked about is her looks. That’s a big part of what Don Jon is poking fun at.” He adds, “Scarlett and I got such a kick out of playing these characters.”

ScarJo says of her character Barbara, “She’s got a lot of conviction, and I think I definitely understood, probably from my own personal experience, the conviction that she has is because she really feels right. She believes herself. She doesn’t doubt herself at all.” She continues, “I doubt myself often. But I do understand that personality at times. It’s probably why she’s successful in so many other parts in her life. It’s why she’s a catch. Unfortunately, it fails her here. You can’t have an intimate relationship with somebody if you always feel right. I know that head-space.”

The raunch in Don Jon does serve some sort of value, however. JGL attacks both genders in a way as we find that Barbara can’t seem to forgive or let go of Jon’s X-rated habits, and Jon can’t seem to let himself become vulnerable in any relationship he may have.

“Suddenly being thrust into the media spotlight, I became more of an object, and my love life became interesting to people. It’s a strange adjustment to make,” ScarJo continued in her interview. “You become very protective … You hide inside yourself. The more comfortable you are with yourself, the more you learn to balance those things. It’s a strange reality.”

“You’re really perceptive and empathetic to the way people are,” JGL says of journalists. “My dad was a journalist, so that would interest me. This is a conversation my dad and I have all the time. It’s ultimately about telling a story.”

And that’s exactly what JGL tried to do here.

As the opening montage of scantily-clad women blasted all over media’s hyper-sexualized pop culture society helped us not only begin to understand the head-space of Jon, but to also feed audiences just the right amount of raunch to get by, perhaps that’s all the seriousness in which we should look at with this film.

ScarJo looks over to JGL and adds, “Joe’s just boring.”

JGL himself nods, laughing, “That’s what I always say, and that’s actually true.”