“Here’s to the fools who dream,” the tagline reads for La La Land.

And for dreamers is true. You know those movies you feel were made just about you? That’s the feeling I get with this, and that doesn’t come by often.

La La Land is incredibly whimsical and moving — fitting for a modern-day musical set in Los Angeles. And it’s not just the chemistry between Ryan Gosling and Emma Stone that will keep you hooked. It’s the story of two ambitious individuals dressed in old-time Hollywood style and extravagant musical numbers who battle for their dreams. 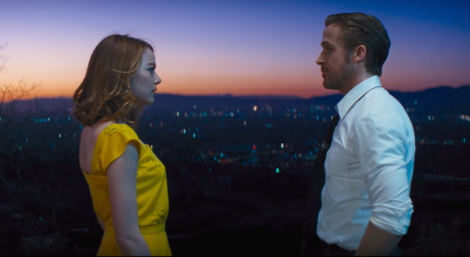 The movie opens in the middle of a traffic jam on a Los Angeles freeway. Obnoxious horns and buzzing radio stations are heard amidst a horde of restless commuters. A young woman in a yellow dress sings a verse and the entire freeway breaks out into a big, bold musical number. She tells a story about leaving her hometown lover to pursue fame and fortune in “la la land” — a theme that forebodes throughout the film (and for many other Angelenos).

When the dance number ends, we return back to the normalcy of Los Angeles life and zoom into our characters, both separate, sitting restlessly in their cars waiting for their own kind of dream.

The film pays tribute to old Hollywood’s past and honors the present as director Damien Chazelle depicts Angeleno life as both cheeky and funny. Chazelle’s last feature Whiplash, a tense film about a young jazz student and his cutthroat music instructor, remains one of the most engrossing film experiences I have ever had; but La La Land’s lightheartedness as a movie-musical is stark in contrast. It is more romantic and enjoyable to watch, though not without pain or emotion (fools who dream have been warned).

When we get back to traffic, we see a disgruntled Ryan Gosling who honks and drives past a distracted Emma Stone. The magic and glamour of old Hollywood, depicted through the fantastical colors and sweeping, lively camera work, is broken as he whizzes by her and she gives him the finger.

Over time, the two have a series of multiple encounters (most times flirty and combative). Stone as Mia is an aspiring actress who works as a barista to the stars on a Warner Brothers studio lot. She gawks at the movie sets and spends her time auditioning for whatever roles come to her in hopes of finding her big break — maybe to assure her that her line of work was no mistake. Gosling plays Sebastian, a talented jazz pianist who wishes to open up his own jazz club. But to make ends meet, he takes on what he sees as demeaning work: playing Christmas carols in restaurants or keys in an 80s cover band.

There are plenty of moments in the film that take your breath away, and that’s easy to do with two leads like Gosling and Stone (and filming on-location at gems like the Griffith Observatory). They bring a kind of magic to the screen that makes their characters incredibly likable.

In an early scene, the two meet at a beautiful twilight overlooking Los Angeles, with magic hour hues of orange and purple that are fit for romance. Yet, our leads seem to bicker at it. But something about the two is undeniable. It is their shared dissatisfaction of the struggles of their careers that bring them together. 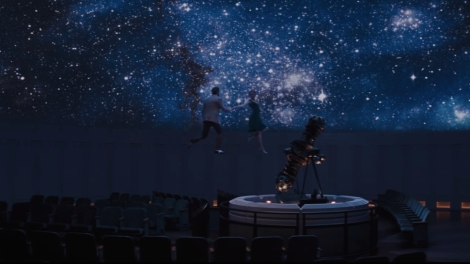 And that’s where the beauty comes. We see them fall in love, constantly chasing and supporting each other’s dreams. They share the kind of modern relationship that driven individuals today long to have. And that’s where the central conflict in La La Land comes forth.

As most young people today strive to find and succeed in a job they can feel passionate about and fulfilled by (myself included), the drive for professional success becomes of highest importance. The pursuit for a happily-ever-after becomes irrelevant as a greater career takes its place.

The tension between ambition and love — from our leads’ sweeping love story to their sheer drive to succeed in their careers — takes force. When Sebastian lands a steady gig playing keys for an old friend in a touring jazz-rock combo, the two become dissuaded when Mia doesn’t agree to tag-along because of her own engagement to her theater work. And at this point, we wonder if the two can still love while still pursuing their dreams —  something that is telling of one of the most modern conflicts among young people today.

In the film’s lead song “City of Stars,” the duet questions whether the stars are “shining just for me” — a sign in the universe that says everything will be okay. Played throughout in succession of the two’s romance, I find that it perfectly embodies the movie as a whole.

They confess that “it’s love, yes all we’re looking for is love from someone else,” to “light up the skies” and say that “you’ll be alright.” It’s a sweet, jazzy number which Gosling’s thin yet warm voice pairs well with against Stone’s cheery, bright vocals. Stone’s captivating performance as Mia brings an element of complete charm and emotional vulnerability, while Gosling’s more subdued performance as Seb is more conventional, yet still charming and charismatic.

But the part that gets me the most about this song is how fitting it is for two dreamers in love.

When the so-called “City of Stars” struggles to show us its light, it is the “rush, glance, touch, dance” of somebody else that makes everything okay. I find that for any ambitious person, it becomes easy to be discouraged when dreams, plans or struggles to pay rent don’t always work out. The only thing we ever want is that “rat-tat-tat on my heart” — someone to look us in the eye and say everything will be alright. Because well, we all want to know that we’re not alone in this thing and that special kind of feeling is the one thing that keeps us all going.

This movie poses the question: do we want it to stay?

Equally entertaining as it is heartfelt and real, La La Land has easily become one of my favorite films in recent years. From Her‘s “The Moon Song” and Begin Again‘s “Lost Stars,” there’s something about sweet, poignant songs that capture the spirit of a film more than the film can do itself that steals my heart. (I recorded my own cover of “City Of Stars” here.) I’d love to hear your thoughts and takeaways, as well.

by clicking on the link provided.

One response to ““La La Land” Review: A Tale of Two Modern Dreamers”