It’s January and the start of a new year, and with that comes the release of the artists playing in the highly-anticipated festival in the desert.

Scrolling through my news feed, I saw numerous artists that I follow caption their photos: “See you in the desert! 🌵”

Oh my god, they’re playing Coachella?! was my reaction.

I scrolled a few more posts down.

They’re gonna be at Coachella too?! Sooner or later, three more came… then five… and then I realized a buttload of artists I have seen or recently seen are playing in the desert this summer.

Now, I’ve never been a big music festival person. I’ve always loved seeing artists in intimate venues, lounges and bars to midscale auditorium rooms. Stadium shows came time to time but very rarely. My first music festival experience was at Outside Lands in 2011 as a fresh 18-year-old high school graduate, and it just reaffirmed my love of seeing these artists put on full shows and sets at shows dedicated to them, with an audience dedicated to them.

But then I saw LANY, a band I fell in love with late 2016 and a band I saw in April of last year perform an intimate show at the Ace of Spades in Sacramento, post that they were playing Coachella and I found myself saying, “Aww I’m so happy for those boys!”

Hayley Kiyoko, another artist who initially came to the spotlight from Disney Channel and who has been taking over the Internet with her “Feelings” (and who I myself could not stop obsessing over as I saw her last November at the El Rey Theatre), posted she was playing and all her dreams were coming true and all the Kiyokians were going crazy for her, and I started going crazy for her.

To put it short, I’m in awe of how I actually know and like a number of artists playing at Coachella this year. Past lineups never excited me (that, or I’ve lived under a rock and just do not know what music is playing these days)… I think it’s a sign. Is 2018 calling me to the desert? 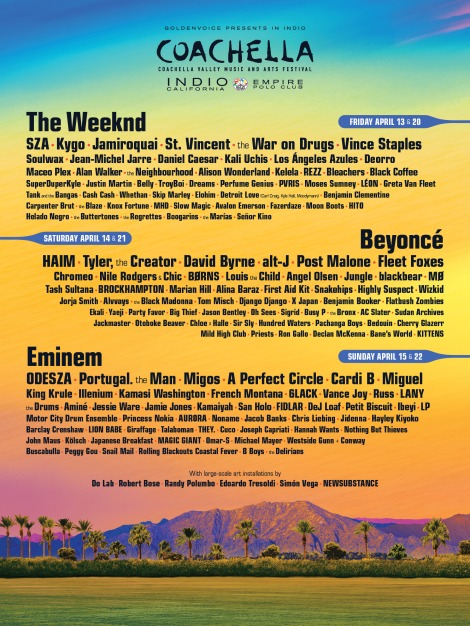 Here are a couple of the artists that I have seen that you should look out for:

LANY: Enough said. Their dreamy synth pop songs about love, heartache and relationships first stole my heart late 2016 and still get me every time. These boys have stolen about every girl’s heart around the world and they are continuing to do so. Coachella is so well-deserved for this band, and it’s crazy just how much bigger they are going to get. (Link: “LANY’s synthpop made everyone feel young and in love at the Ace of Spades” 4/2017)

Hayley Kiyoko: This Disney gal is making such infectious electronic dance and pop music. If you haven’t listened to her yet, her single “Feelings” hit about 1m views in its first week on YouTube (I could be wrong, it could’ve been 2m). Either way, she is a vocal proponent of the LGBT and her songs like “Sleepover” and “Girls Like Girls” have made her both an icon and major influence for so many people out there. Plus, she’s one hell of a performer. (Link: “Hayley Kiyoko brought her queer pop ‘Feelings’ to sold-out El Rey debut” 11/2017)

Giraffage: This bedroom pop DJ and music producer has slowly been taking over the electronic dance music world, and I had the lovely opportunity to be able to speak with Giraffage, also known as Charlie Yin a few months back to talk about his music. Surprisingly, his smooth electronic beats, synths and pop vocals are laced with spacey atmospheric lounge tunes and sounds that his songs have truly mesmerized me. (Link: “Giraffage Interview: From Bedroom Pop to the Main Stage” 11/2017)

Japanese Breakfast: I first heard of Japanese Breakfast when my favorite indie rock goddess Mitski brought her along on tour. Japanese Breakfast, who is Korean-American Michelle Zauner, has created a shoegazey electronic pop sound that resonates with a lot of her listeners. Inspired from the grief of the passing of her mother, her music has come a long way, and I was so thrilled to be able to interview her and see her perform live. (Link: “Japanese Breakfast Interview: From Grief to ‘Soft Sounds From Another Planet'” 10/2017)

Portugal. The Man: You’ve probably heard this alt-rock band’s single “Feel It Still” all over the radio in the past year, but this band has been around for years and I first fell in love with them during their Warped Tour days playing acoustic rock tracks inflected with a little Americana like “People Say” that were incredibly catchy and guitar-driven (I still wished they would play that song live). They played on tour across the country this past summer and I had the fortunate opportunity to see their show with a new friend at the House of Blues in Anaheim, CA, and I have to say — they put on one hell of a show. They know how to play and make it a party (plus, their light show with funny projected captions was pretty amazing).

The Marías: I’ve been a friend of lead singer Maria Zardoya for a few years and it’s been so amazing to see her catch wind with her music of The Marías, co-headed by her boyfriend Josh Conway. Their love and relationship is infused in their music, as it is full of warm, harmonizing vocals, catchy guitars and rhythms inspired by a Spanish cabana. Their music that makes you feel like you’re lounging on a warm California night. And I love it. Listen to “I Don’t Know You.” Now.

JUNGLE:  This band caught my ear what seems like three years ago in 2015 when I heard their single “Busy Earnin’.” I was immediately caught by their infectious big band sound that was full of funk, hip-hop and soul. This London-based soul band came to Los Angeles just last month and I had a hell of a time at their show. (Link: “JUNGLE brings explosive modern soul to the El Rey Theatre” 12/2018)

Here are a couple of artists that I have not seen but have been wanting to:

Tash Sultana: Tash is an Australian singer-songwriter who I caught wind of randomly last year. I was mainly in awe of her musicianship, claimed to be a “one woman band” as she loops her instruments and vocals to create infectious tracks. Her live set, which I saw through a KFOG radio session last February, is completely impressive. She plays guitar, bass, trumpet, flute and percussion inflected with this psychedelic soul, reggae sound. She’d be awesome to see live.

Tom Misch: This young London-based singer, producer and multi-instrumentalist first won me over with his song “Wander With Me,” which a friend first showed me by chance a year ago. I fell in love with his “soulful electronic” sound, full of funky basslines, groovy melodies and neo-soul instrumentation. His melodies are great and it’s clear he is a talented musician with a sound of his own. He’s on the rise. I’m dying to see him.

HAIM: I’ve only heard good things about these three sisters’ live show. Their pop rock, indie sound is awesome, and I just love seeing and supporting female-fronted bands. “If I Could Change Your Mind” from 2014 was the first song that won me over for its infectious grooves and throwback to the eighties era that I spent years and years of my high school time in.

A couple other notable artists:

Jamiroquai: Jamiroquai brings me back to early high school or middle school when I fell in love with all their soulful funk, feel good tunes that you just don’t get anymore today. “Canned Heat” was the song I shamelessly jammed out to for its crazy feel good funk soul sound (just thinking about them makes me swoon). They’re a bit of an older act… and a little random. (When’s the last time they were in the US?) They should be fun.

St. Vincent: Last February 2016, I heard there was a guitar created for women, by a woman. St. Vincent released her own special guitar for Ernie Ball and I fell in love with it. “A guitar can be so many things,” Vincent said. “For me, in my life, it’s been a shield, it’s been a weapon and a vehicle by which I’ve gotten to have an incredible artistic and emotional life.” Read more about it in my article here.

Kygo: Kygo’s remix of “I See Fire by Ed Sheehan was one of the first mainstream EDM songs I fell in love with. That DJ has remixed tons of great tunes and I just know he’s amazing live and will kill it.

The War On Drugs: There’s something to be said about psychedelic music. It is its own kind of genre that takes you into another field, space, coloring up the atmosphere in ways we can’t even describe. The War On Drugs is the kind of music you can put on and just let it play in the background, let it consume you without thinking. I’m not sure how I first found out about this band, but their rhythmic indie rock and Americana sound (first founded by the amazing Kurt Vile) is just lovely. Their songs are sweeping, beautiful, full of synth pop rock sounds that are meditative and atmospheric. I’m not too familiar with their chronology but “Red Eyes” and “Under The Pressure” are just beautiful.

Now, I know some people are asking, “Where are the bands this year?” And, for a number of these artists, I am questioning if the Coachella or music festival crowd is really for them. (Is War On Drugs too “old soul” for the millennial crowd?)

Either way, there are some good names on this list and I’m sure I’ve missed a lot of other notable artists.

Who are you most looking forward to in the desert?